The Many Faces of Harry Beckett

UPDATE ... the book was released on 10th January 2020 and is avilable from https://jazzinbritain.org/product/the-many-faces-of-harry-beckett/ 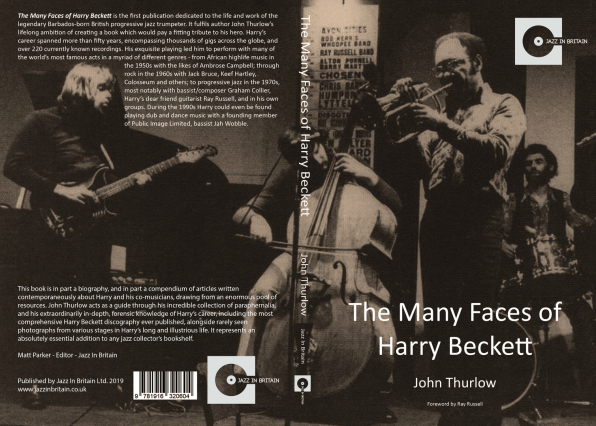 The Many Faces of Harry Beckett is the first publication dedicated to the life and work of the legendary Barbados-born British progressive jazz trumpeter. It fulfils author John Thurlow’s lifelong ambition of creating a book which would pay a fitting tribute to his hero. Harry’s career spanned more than fifty years, encompassing thousands of gigs across the globe, and over 220 currently known recordings. His exquisite playing led him to perform with many of the world’s most famous acts in a myriad of different genres - from African highlife music in the 1950s with the likes of Ambrose Campbell; through rock in the 1960s with Jack Bruce, Keef Hartley, Colosseum and others; to progressive jazz in the 1970s, most notably with bassist/composer Graham Collier, Harry’s dear friend guitarist Ray Russell, and in his own groups. During the 1990s Harry could even be found playing dub and dance music with a founding member of Public Image Limited, bassist Jah Wobble.

This book is in part a biography, and in part a compendium of articles written contemporaneously about Harry and his co-musicians, drawing from an enormous pool of resources. John Thurlow acts as a guide through his incredible collection of paraphernalia, and his extraordinarily in-depth, forensic knowledge of Harry’s career, including the most comprehensive Harry Beckett discography ever published, alongside rarely seen photographs from various stages in Harry’s long and illustrious life. It represents an absolutely essential addition to any jazz collector’s bookshelf.

Coming soon ... The Many Faces of Harry